What Happens When A Designer G..

Where Geology And Geometry Intersect

Studio Esteta Believes In The ..

Where Geology And Geometry Intersect 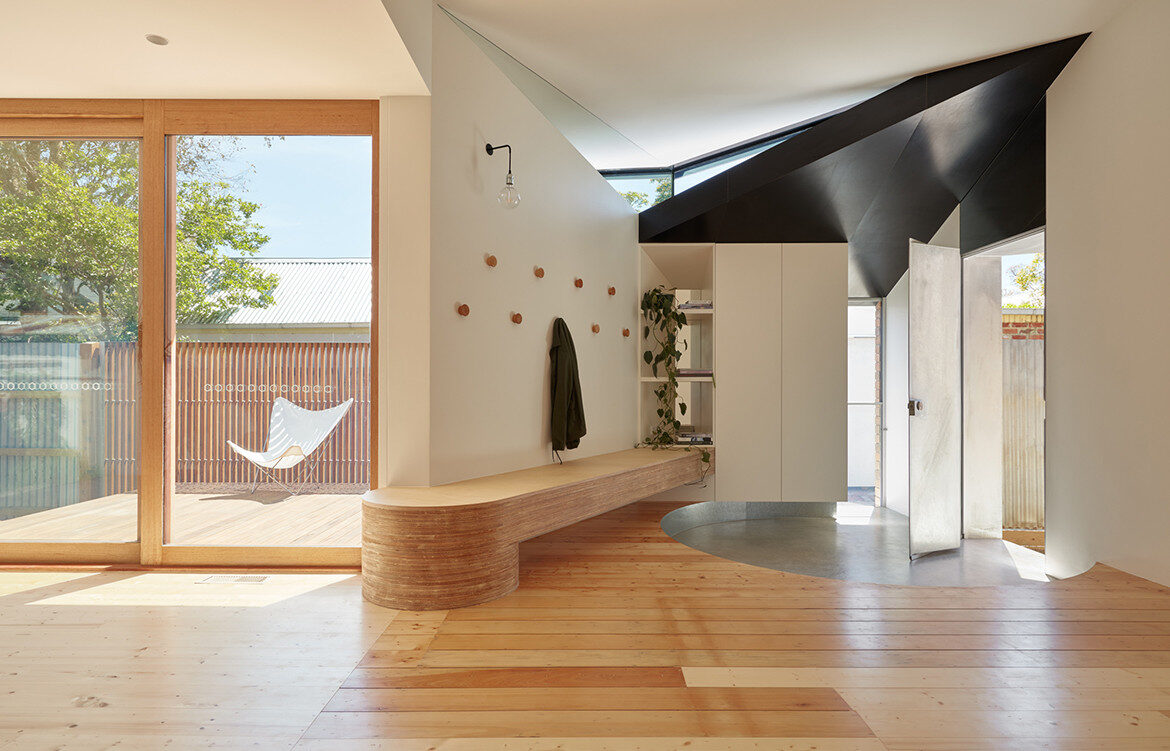 The transformation of an East Brunswick home by Michael Roper and the team at Architecture Architecture draws inspiration from tectonic shifts in the Earth’s underbelly.

Taranaki Rift House takes its name from the East Brunswick street in which it’s located, so-named after the Taranaki Rift, a significant geological rift beneath the Tasman Sea. However, the interconnectedness between place and name does not end there. “We got to thinking about the rift and realised that the name resonated with the geometries of our design,” explains Michael Roper, co-founder of Architecture Architecture.

Michael is referring to the architectural “folds, faults, ruptures and fractures” that resulted from working within the geometries of the existing house. The client brief called for a renovation and extension that would include the addition of a fourth bedroom, more generous living areas, a new laundry and WC, whilst maintaining the size of the existing backyard. “Making more efficient use of the front of the house meant grafting an extension onto the side, which was challenging from a formal perspective,” continues Michael. “It became an exercise in slippages and ruptures – extending the existing roofline down to the boundary, then cracking it open to bring light into the entry.”

“Making more efficient use of the front of the house meant grafting an extension onto the side.”

The entry distinctly sets the tone for the continuous “visual language of folds and ruptures” that occur elsewhere in the extension. It’s approached via an obstructed line of passage, complete with turns and level changes, creating a deliberate threshold at the front door. “Tracing the left edge of the door, a playful thread of timber noggings appear as if a continuation of the original eave line, drawing the visitor’s attention to the relocated entry,” explains Michael. “The hot-dipped galvanised door rests under a simple steel awning, anchoring it to the house with a slither of glass between its folds, allowing visitors to be seen from inside as if it were always slightly open. A welcoming gesture. (At night, the light serves as a beacon for visitors, directing them to the entrance.)

Moving inside Taranaki Rift House, the concrete steps from the outside continue internally, forming a sunken, circular threshold. “Here, the sunken circular floor suggests both an embrace, and temporary quarantine before being invited into the home-proper,” explains Michael. “Stepping up into the living area, the transition from concrete to timber signals arrival into the heart of the home.”

The relocation of the entrance to the side of the house means that guests arrive directly into the living areas, completely bypassing the private quarters of the house.

In addition to its bold material manipulation, the relocation of the entrance to the side of the house means that guests arrive directly into the living areas, completely bypassing the private quarters of the house to the rear, fortifying the clients’ desire for the bedrooms be a place of retreat.

Economically and environmentally, Architecture Architecture has also produced a house with great environmental sensitivity. For example, by finding a way in which to fit the fourth bedroom under the existing roofline, the team was able to significantly reduce material costs and associated environmental impact. In addition, bricks from the demolition were recycled for the construction of the extension, cross ventilation through openable windows optimise cross-ventilation and the maximisation of the northern exposure has significantly reduced the need for artificial illumination during the day.

Ultimately, Taranaki Rift House has both fulfilled the client brief and pushed architectural boundaries. “The client’s really wanted a house that was active and lively,” says Michael. “The unusual, dynamic geometries of the extension were a response to their desire for playful liveliness.”