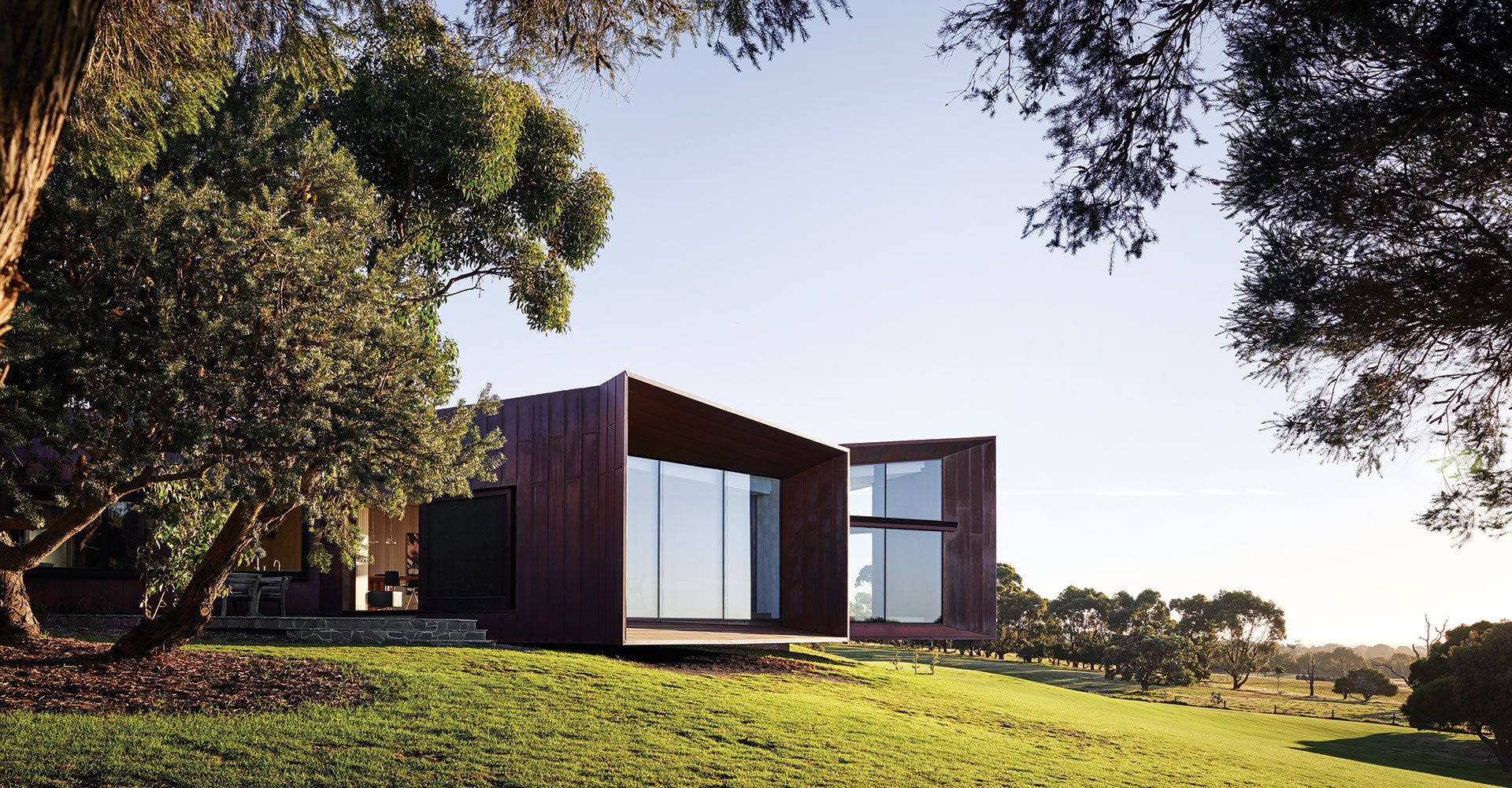 Old and new come together in this house to create an experience which selectively embraces the stunning views.

Given the location, overlooking the Bass Strait and Port Phillip Bay, it could have been tempting to create two large picture windows in this home to capture each vista. However, architect John Wardle, known for crafting his bespoke homes, set up a journey that not only embraces these outlooks, but – just as importantly – also the rolling hills surrounding this unique rural property.

This multifaceted home is located at Boneo on Victoria’s Mornington Peninsula, just over an hour’s drive from Melbourne. Thoughtfully “clipped on” to a 1980s four-bedroom house, the large contemporary addition, approximately 400-square-metres in area, allows the owners and their four adult children to live independently, but also come together as a family. 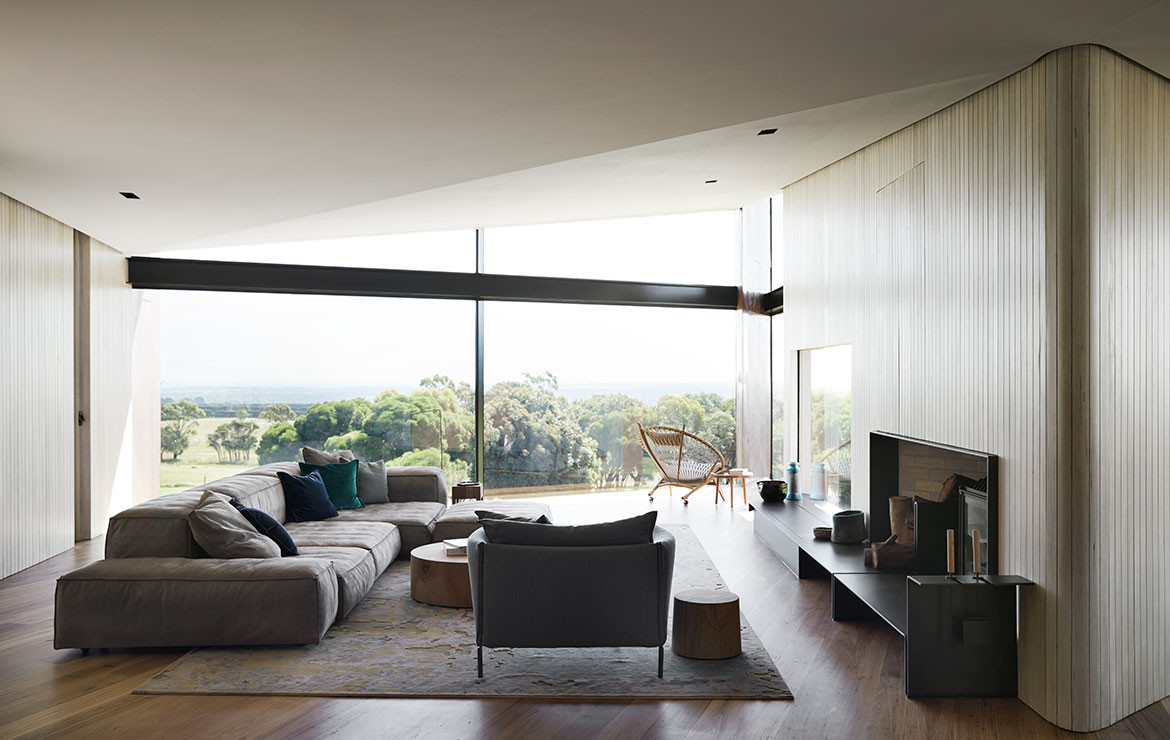 “Our clients saw my modest house on Bruny Island in Tasmania (previously featured in Habitus magazine and recipient of the prestigious national architecture award, the Robin Boyd Award in 2012). They weren’t sure what they should do with this property: retain and update the 1980s house; move forward and build a new house; or do both,” says John Wardle. The architects from his practice who worked closely with John, Andrew Wong and Diego Bekinschtein, came up with a number of strategies including demolishing the original house, or, as decided, creating a design with two separate parts. “John and his team have created something greater than the sum of its parts,” says the owner, who sees the solution as capturing the “textural feel” of the land itself. “He’s nailed the essence of what we were looking for.”

Family, friends and visitors (the house is regularly used for entertaining large groups of people) are not exposed to the magical views until they arrive at the ‘knuckle’ of the home, the entrance and link between the past and the present. They arrive at the centre of the floor plan via a 4.5-metre-high timber ‘hedge’ of four parallel fences. These timber layers screen a courtyard garden linked to the original home and create a dialogue with the copper cladding used for the contemporary design. “There’s a considerable amount of mist that falls over Main Ridge that will give the copper a rich patina in a relatively short time,” says Diego. 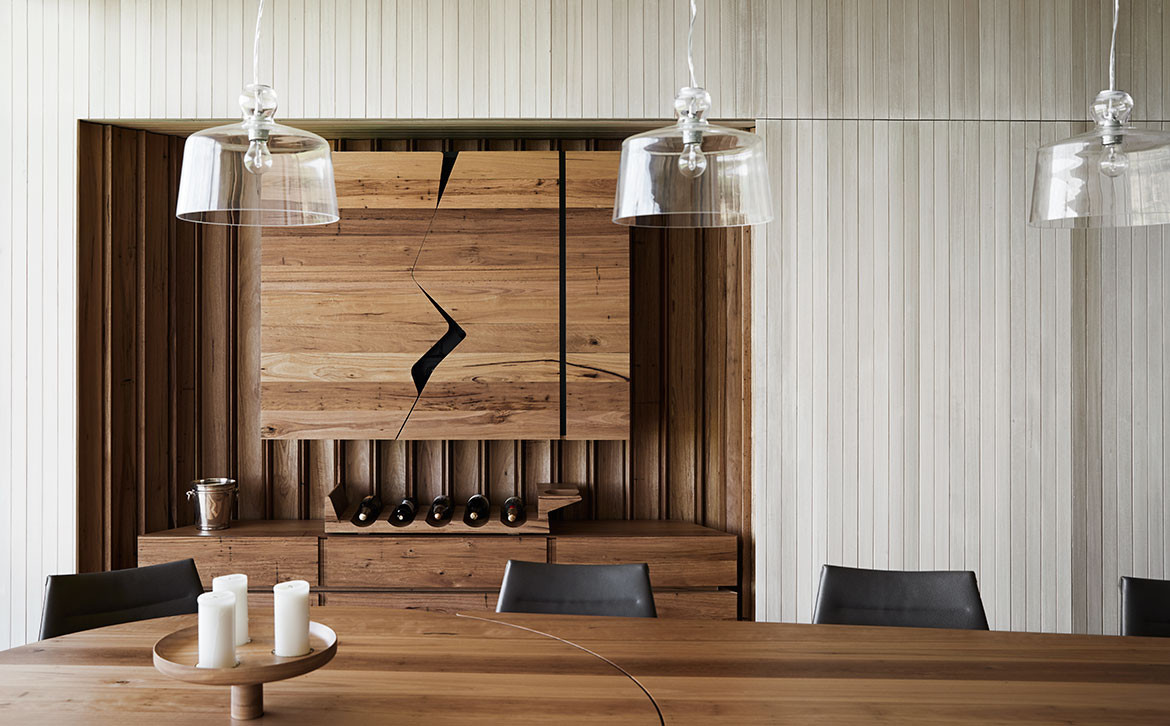 The house, orientated to the north, doesn’t present either a singular view, nor the same qualities of light throughout. The dining area, for example, embracing the northwest light, is protected through deep window reveals. As with the changing light, the dining area takes on a different voice depending on whether the finely crafted built-in bar is concealed behind a limed timber sliding wall/door or left open, as is the case when entertaining. “You’ll find that the walls vary in thickness, up to a metre in depth to accommodate such pieces,” says John, who worked closely with furniture designer/maker, Andrew Lowe, in creating the timber dining table.

The kitchen, also orientated to the north, and benefiting from a rural rather than a bay or ocean aspect, is contemporary, but with a strong dose of country – or as John says, “romantic contemporary”, referencing the open brass shelves, timber-battened walls and Moorish-style ceramic tiles on the walls, as well as those embedded in the kitchen’s timber island bench.

Although there are open and fluid spaces at Boneo House, there are also intimate nooks, such as the walk-in dressing area, the ensuite bathroom and the study. Accessed through secret doors (timber battens extend from the walls to the doors), light filters in from generous skylights. “We located all the services, including the laundry and guest powder room, into one core,” says Andrew.

This 1980s home has been lightly touched by John Wardle Architects. New bathrooms, double-glazing and open fireplaces bring the original home into a new comfort zone. But it is the recent addition that acts as the beacon for both family and friends, with the owners shutting the glass doors behind them and settling in for their extended weekends. 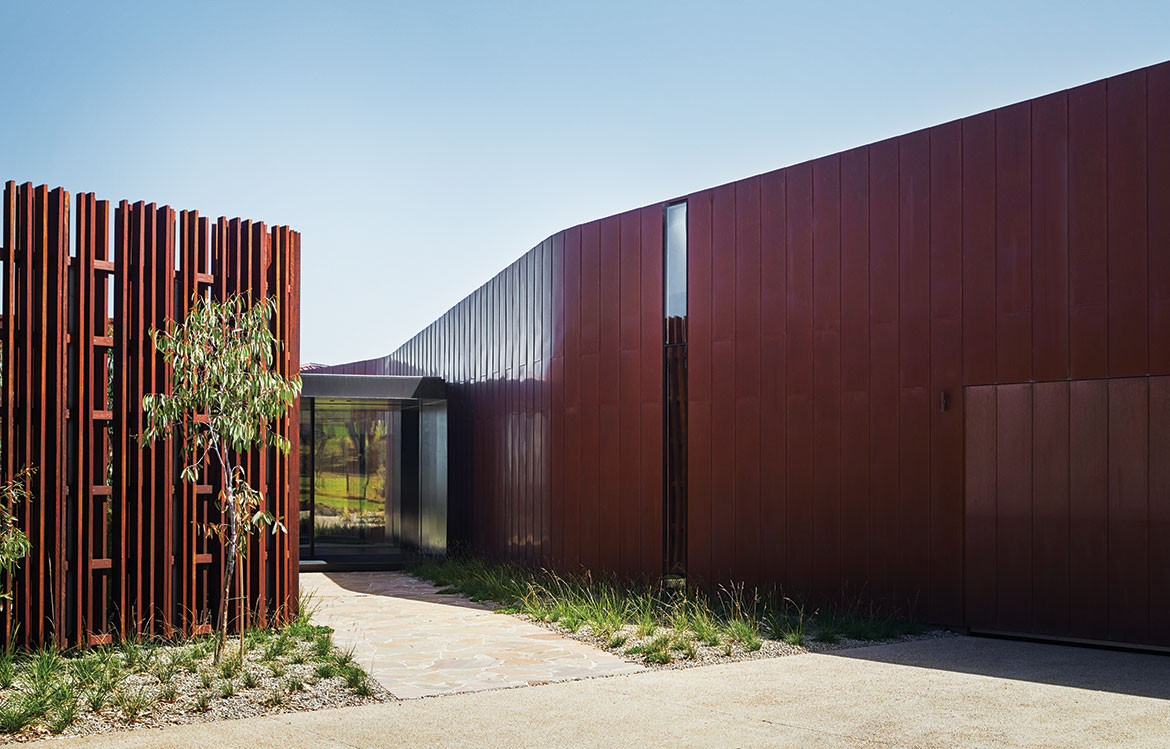 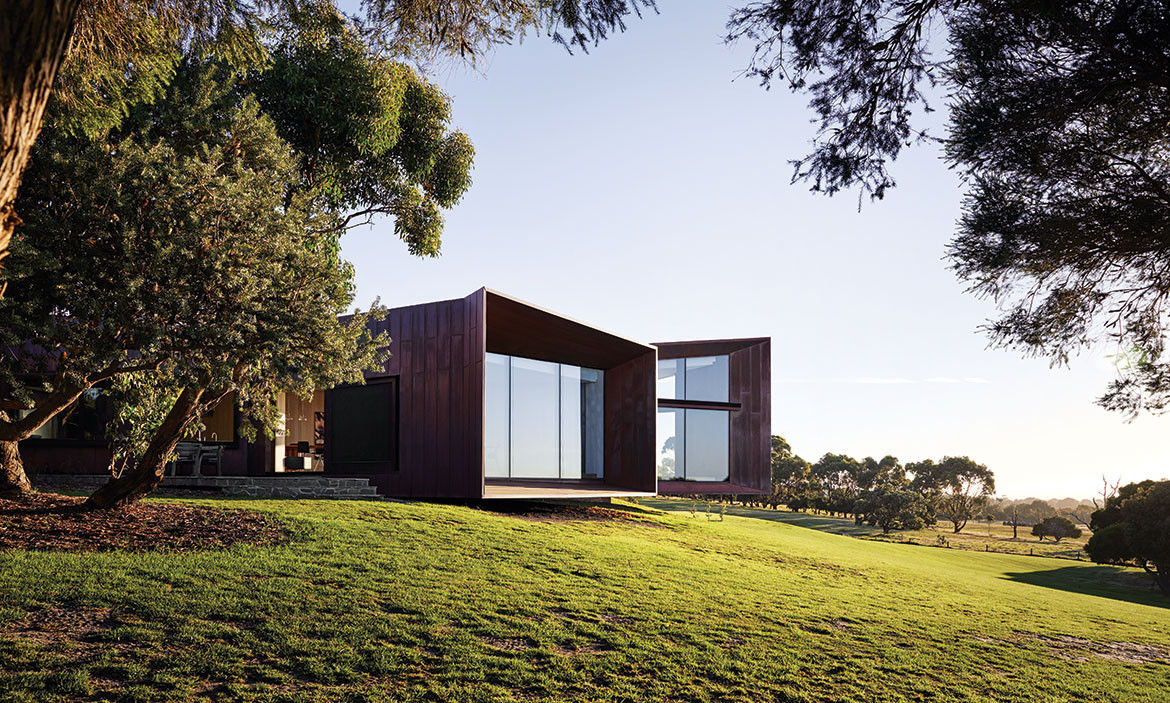 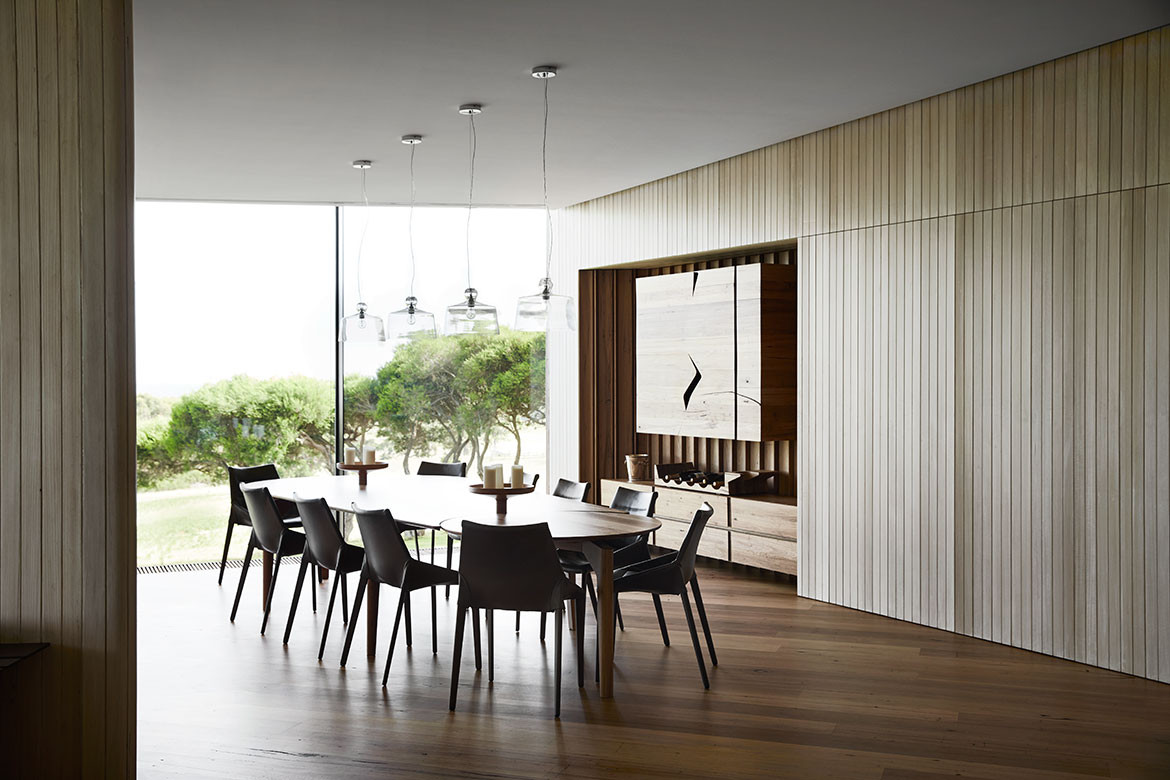 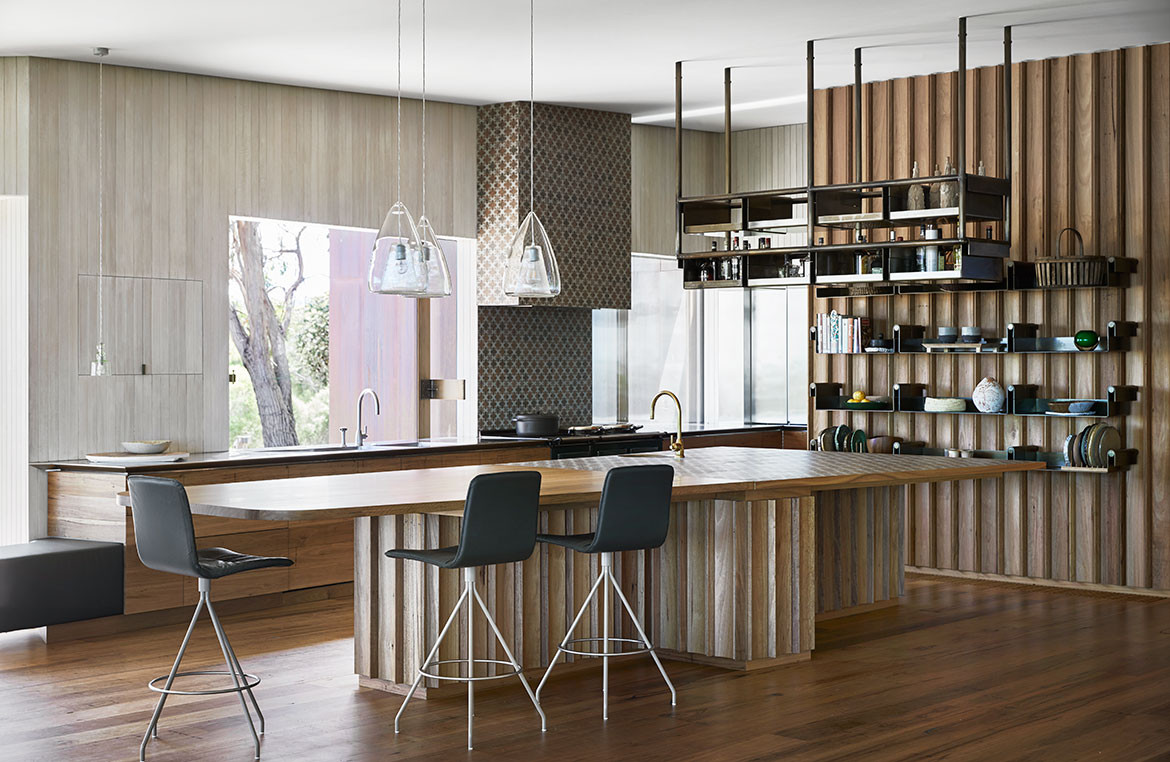 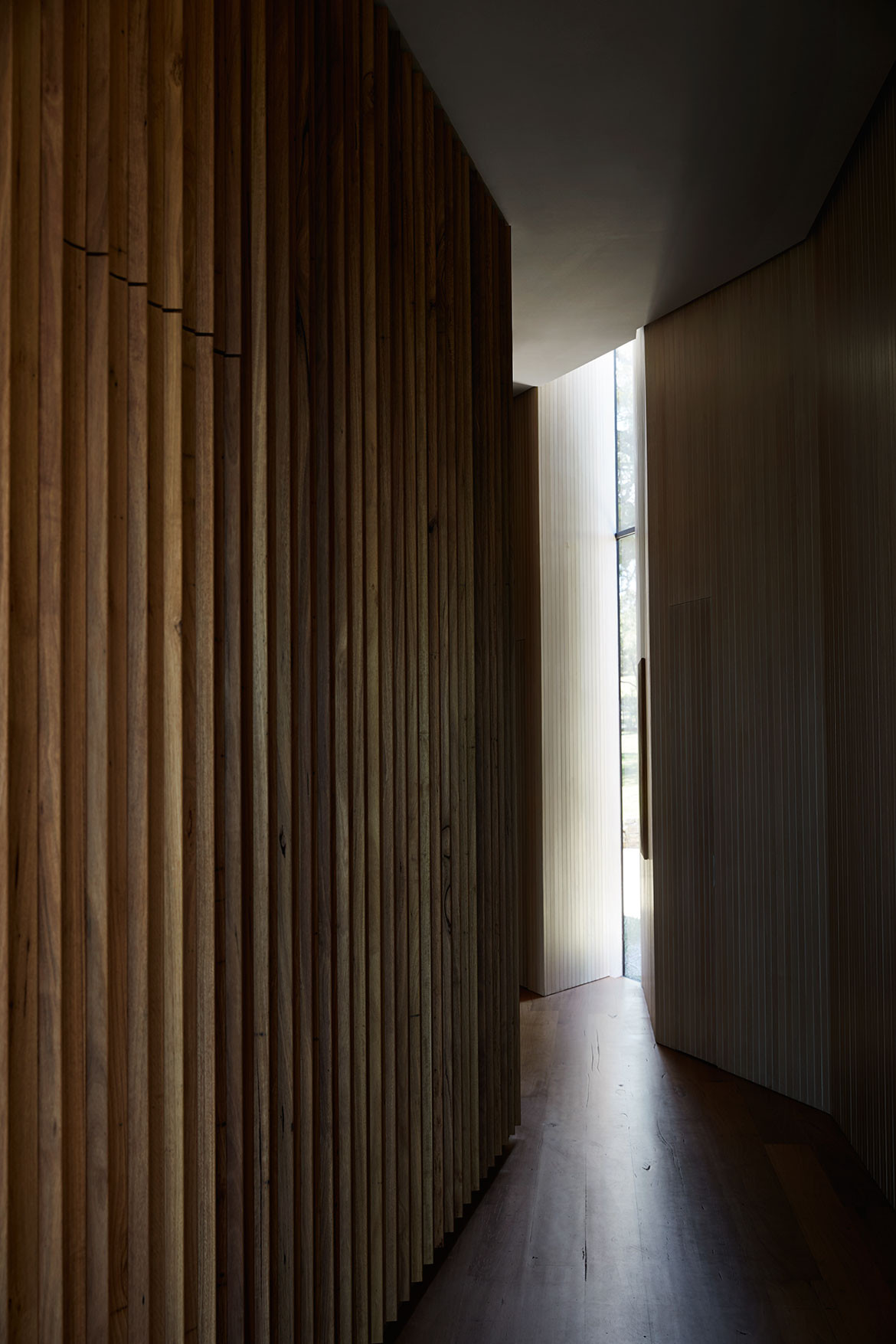 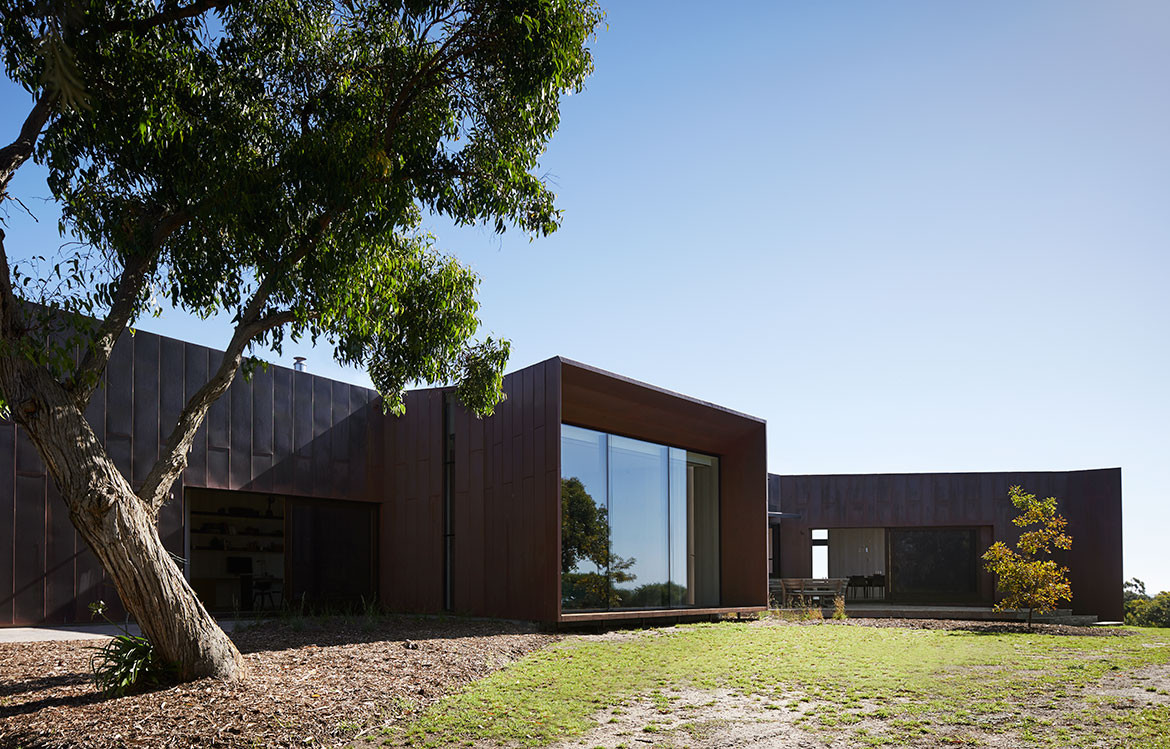 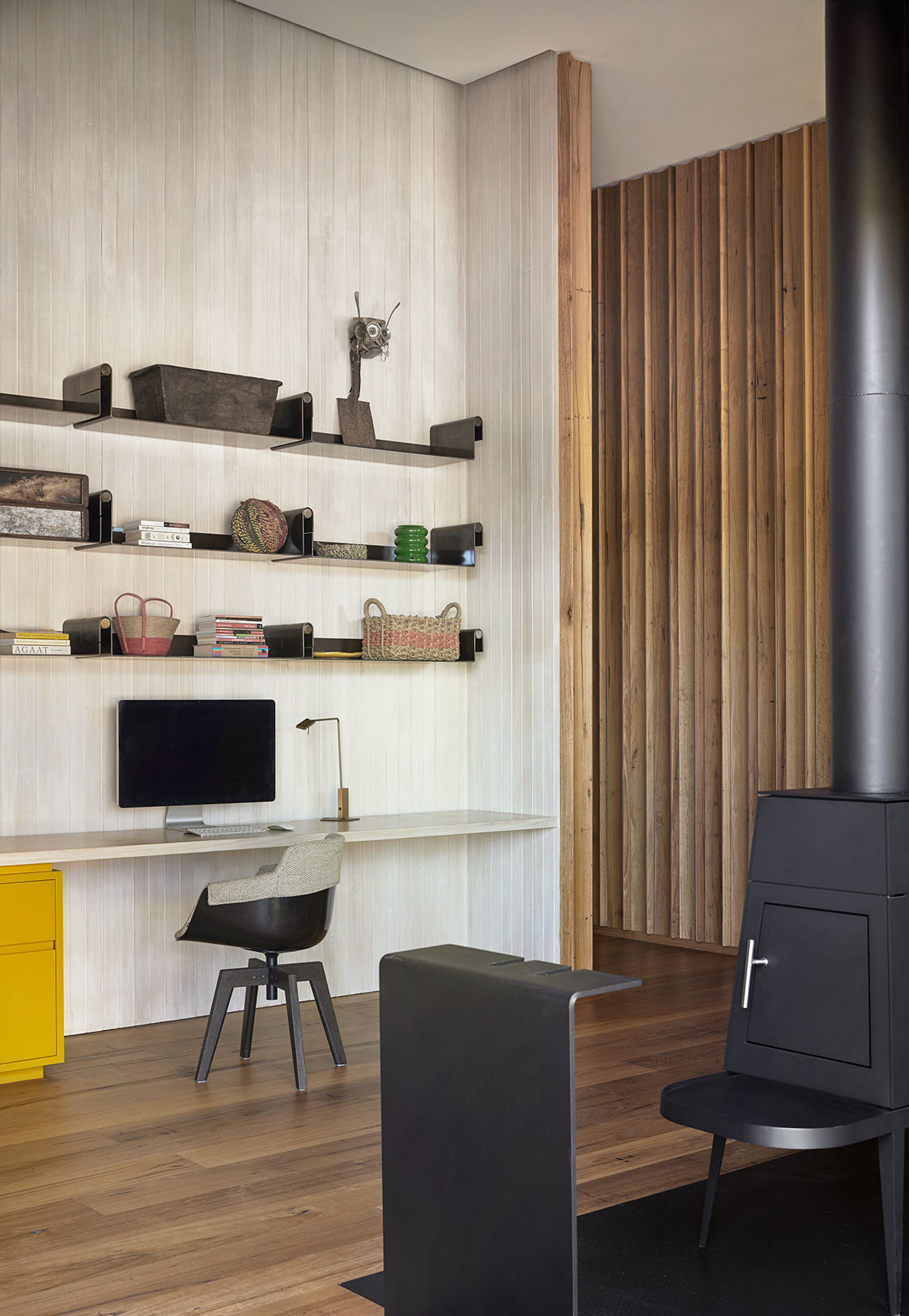 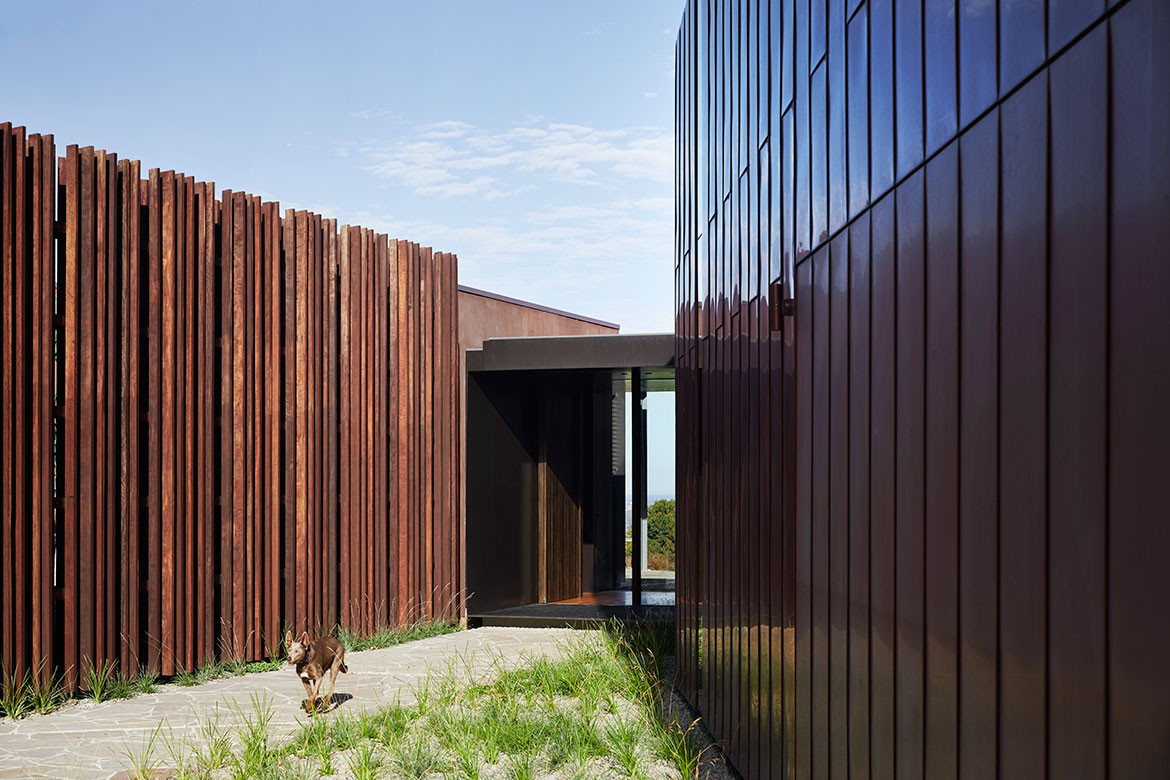 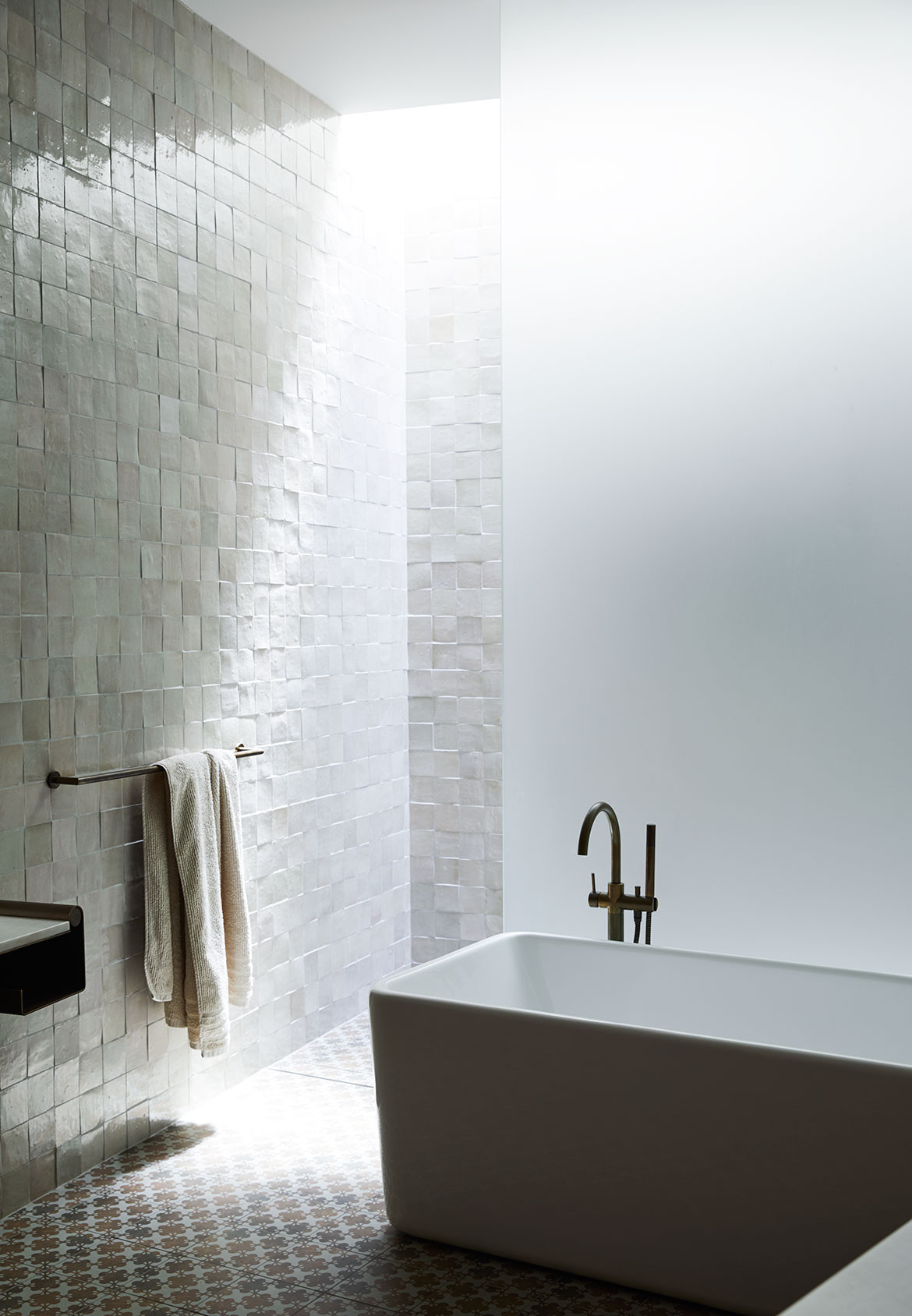 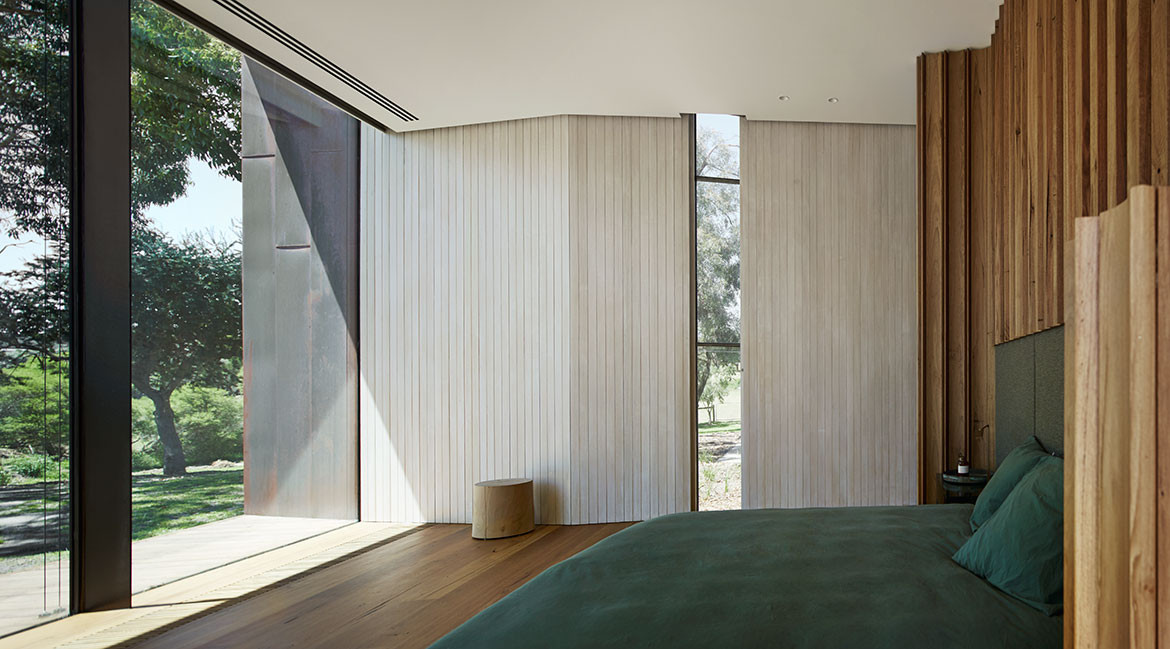 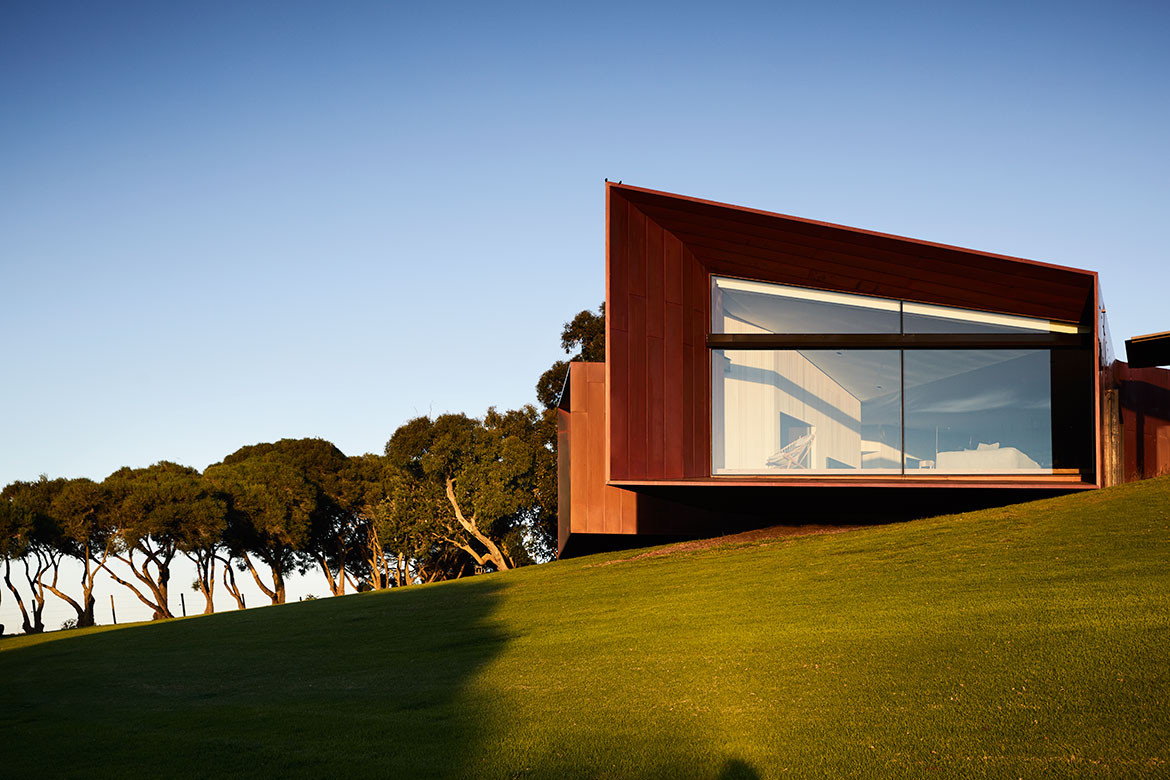 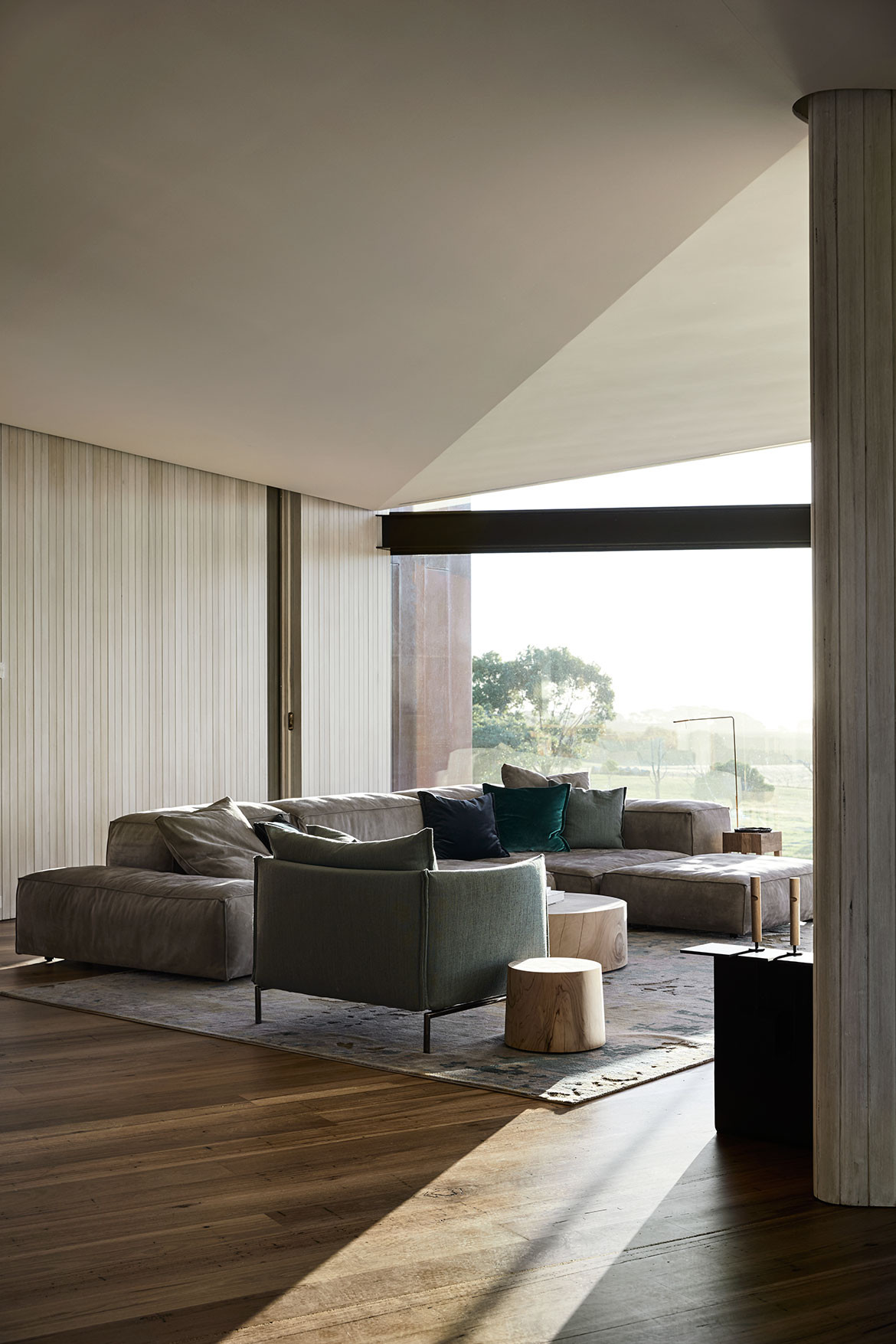 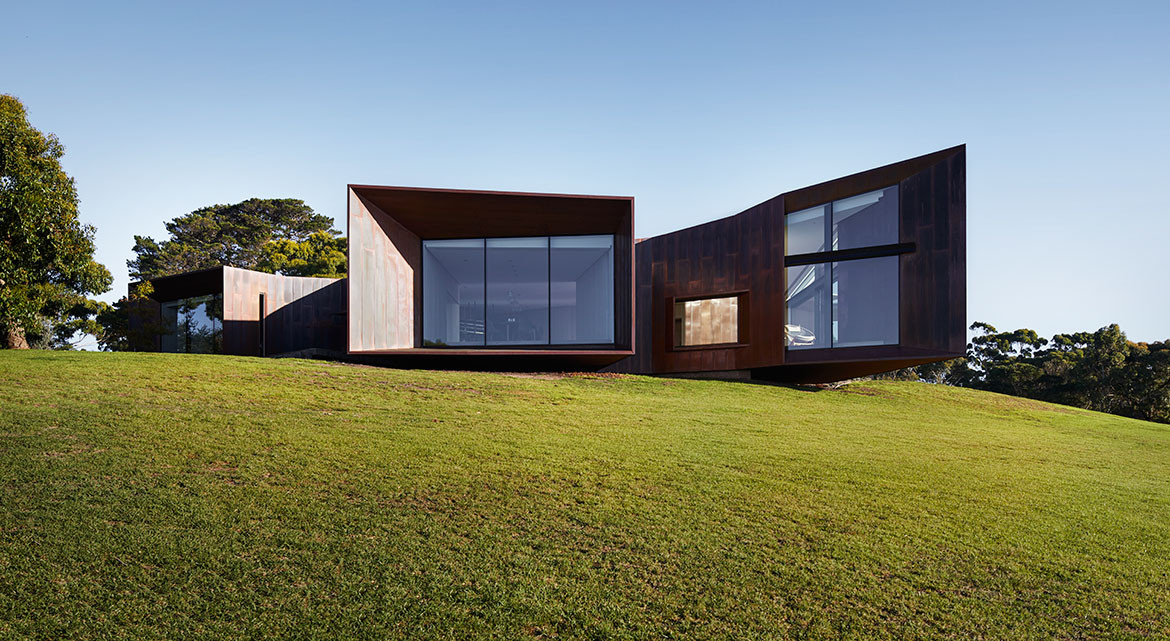 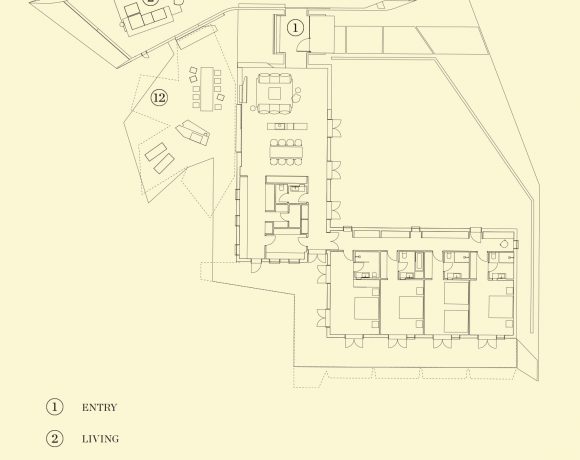